Rodney Atkins and Los Palominos to Perform at Fiesta Edinburg 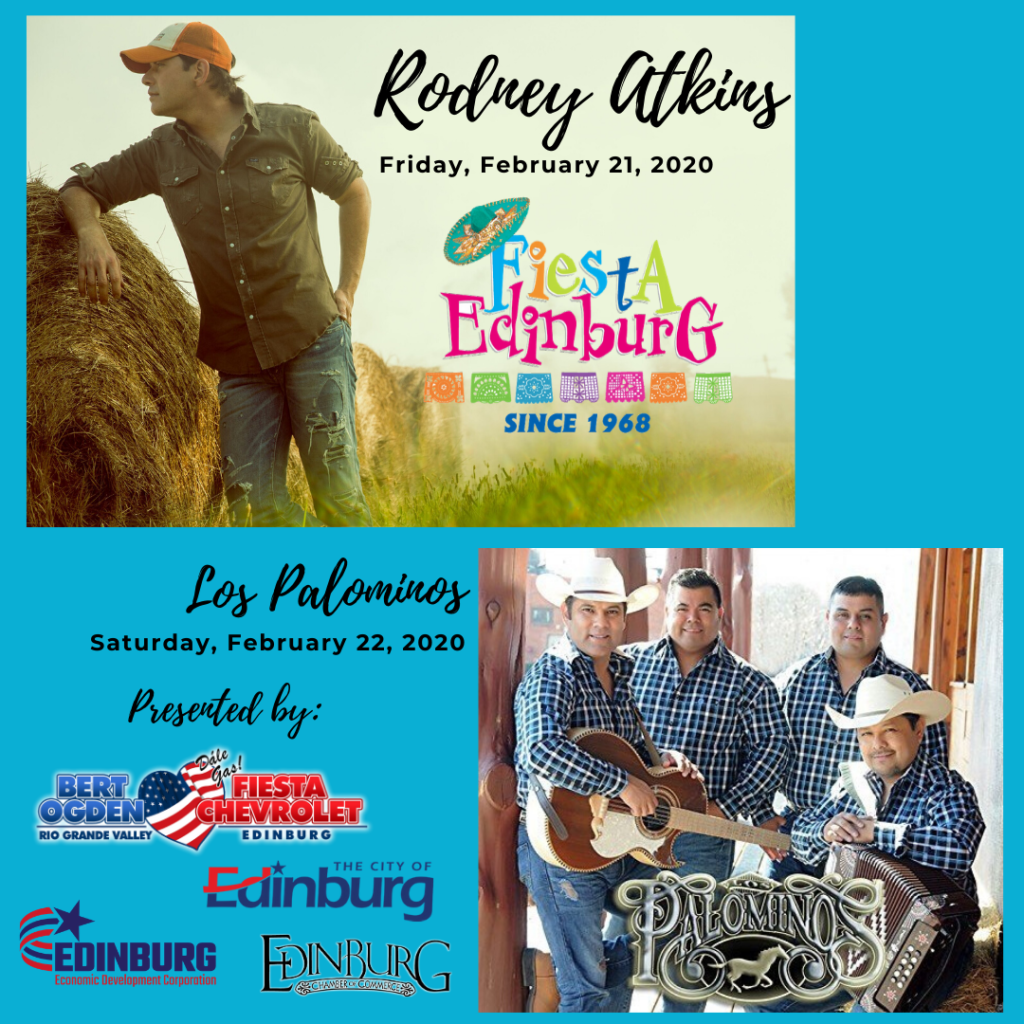 Edinburg – The Edinburg Chamber of Commerce along with Title Sponsors Bert Ogden Fiesta Dealerships, City of Edinburg, and Edinburg Economic Development Corporation, proudly presents the 52th Annual Fiesta Edinburg 2020. This year’s headliners were announced at a recent press conference at Fiesta Chevrolet in Edinburg. On Friday, February 21st, Rodney Atkins will perform all his #1 hits and latest singles, and on Saturday, February 22nd, Los Palominos, a valley favorite, will perform at H.E.B. Park, located at 1616 S. Raul Longoria Rd., in Edinburg.

This award-winning country music artist, Rodney Atkins, did not even pick up a guitar till he was in high school. However, his interest in country music grew, and soon after graduating college, he began performing in Nashville. The opportunity to launch his career came in 1997 when he signed with Curb Records. After some hits and misses, he began making the country charts with songs like Honest (Write me a List), Watching You, These are my People, If You’re Going Through Hell, and Farmer’s Daughter.

Rodney Atkins’ fifth studio album, Caught Up in the Country (5/10/19), reveals an artist who is confident enough to know that making your best music can require patience and experimentation. While his storied career has reached such heights as being named the Top New Male Vocalist at the 2006 ACM awards and seeing his single “Watching You” become the Number One Song of the Decade according to Country Aircheck, it’s been more than seven years since Take a Back Road, his last record of new material. But Atkins knew that this time, he wanted to bring his songs further than he had ever gone before.

“I’ve never taken it lightly,” Rodney said, “but with some of the other albums, I got to take my time for part of the album. But then when you get that first single finished, you gotta go, and you start working at a faster pace for the second half of the album. This time, I got to take that time with every song.”

The results, he believes, are the most daring collection of his career, touching on emotions and sounds which continue to expand his range—from the twangy celebration of the album’s title track (featuring the roof-raising vocals of the Fisk Jubilee Singers) to the slow-burn cover of Jason Isbell’s “Cover Me Up.” And with six Number One singles, eight Top Five singles, and over 13 million units sold, Atkins sees that his track record validates his approach. With Caught Up in the Country, one of country music’s biggest stars is starting his next chapter.

The Arreola brothers are four young men united in their passion for music. From the beginning, in the year 1986, under the guidance of their father, also a musician, the Arreola brothers demonstrated a humble yet natural artistic way of presenting their music on stage leaving you with an image of triumph.

Being such a young act, they named the group Los Tremendos Pequenos, that would later be changed to Los Temendos De Johnny Arreola, until they decided on the name Los Palominos.

In the year 1989, Armando (Mando) Lichtenberger Jr. and Oscar De La Rosa, members of the group La Mafia, offered their support by producing a demo for Los Palominos. This demo would go on to open many doors of opportunity. This was the start of a new career, recognition from fans, the press, and their peers in the music world that would take them to a new level. They would come to receive many gold and platinum awards for their recordings and be nominated and win three GRAMMY’S!

Along with two great nights of concerts, come experience the thrills of the Heart of America Carnival, The Fearless Flores Family thrill show will be presenting their combination of circus and thrills with aerial Daredevils and Motorcycle Madness daily, and for the little ones, Animal Connection will host a petting zoo and pony rides. For true family entertainment and non-stop action, join us at Fiesta Edinburg 2020 running February 20-23, 2020 at H.E.B. Park!

Tickets for both concerts can be purchased at WWW.HEBPARKRGV.COM. Join Magic Valley Electric Coop and Linebarger Attorneys at Law by becoming sponsors for Fiesta Edinburg 2020, a fantastic, free-to-the-public, quality-of-life event! For more information, you can contact DeAnna Garza, Special Events Director, at the Edinburg Chamber of Commerce at 956-383-4974, or email at [email protected].