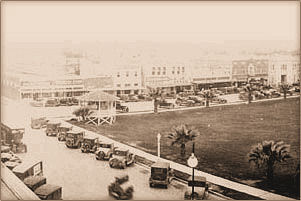 In 1908 a small town, known as Chapin was selected as the new county seat. By oxcart, official records made the journey from Hidalgo to Chapin. The settlement of Chapin was named after County Judge Dennis B. Chapin, but in 1911 was renamed Edinburg. During the making of present day Edinburg, the County Jail was built in 1909 shortly after being named County Seat. During this time of growth and prosperity, rapid development could he attributed to John Closner and W.F. Sprague. Trade blossomed in Edinburg and Hidalgo County which had been predominantly ranching until 1915.

Edinburg is filled with rich historical reminders of the past. Even the names of the streets have their own history. Many of the streets in the city were named after Executives of the Southern Pacific Railroad in hopes that they would build a line to the Rio Grande Valley. Streets named after railroad officials include Van Vleck (Van Week), Lovett, Peter, Loeb, Kuhn, Mclntyre, Harriman (later changed to University), Mahl, Stubbs and Fay. Local leaders took the following streets: Samano, Champion, Sprague, Closner, Chapin, Baker and Chavez. On January 11, 1927 history was made when the train whistle blew as it arrived into Edinburg. Thousands gathered for the grand ceremony school children took the day off to witness the driving of the “golden spike”. Dignitaries from throughout South Texas and from Southern Pacific, rode the train from Lull to Edinburg, as bands played and food was prepared for thousands on the town square.

The Edinburg Southern Pacific Depot operated out of a rail car until the depot opened its doors on August 1, 1927. Before the time of the Southern Pacific. Edinburg had been served by the San Antonio-Rio Grande Valley Railroad. Later service was provided by Missouri Pacific. 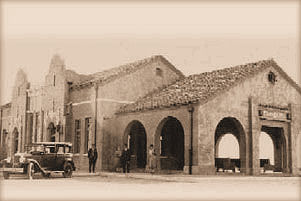 Edinburg experienced a building boom in the late 1920’s. During the expansion of the city, a country club, a hospital and several schools were erected. The Ebony Hills Country Club was built in 1926 to accommodate the needs of the affluent citizens of Edinburg. The Edinburg Municipal Golf Course now stands where the Country Club once did. In 1927, Grandview Hospital was built in Edinburg. During this time Edinburg set itself apart as a leader in education. Edinburg Junior College was built, as well as several other public schools. A compact campus was situated on 8th Avenue that housed grades kinder through sophomore year of college. The facilities built between 1927 and 1929 include the auditorium, administration building, science building, engineering building, library and the faculty club that provided housing for teachers and high school/junior high students. Sam Houston and Stephen F. Austin Elementary schools were built in order to offer the best education possible. The Edinburg College graduated its first class in 1929. In 1933 Edinburg College became Edinburg Junior College and Edinburg Regional College in 1948. Nineteen-fifty one marked a pinnacle moment for the university when it became a state supported school. The support of the state prompted yet another name change, Pan American University. In I971, the institution added graduate programs to its curriculum.

The Chamber has been involved in many Historic events throughout its existence. Some events include the organization of the Edinburg Community Hotel, the development of a new campus for Pan American University; attracting Haggar Apparel to Edinburg, gathering the support for the Edinburg Activity Center, and most recently the renovation of the Edinburg Southern Pacific Depot.

Leaders and citizens of Edinburg have always been traditional and have possessed community pride. Edinburg has been awarded the All-American City honor three times, once in 1968, 1995 and again in 2000. Edinburg is “As good as it gets.”