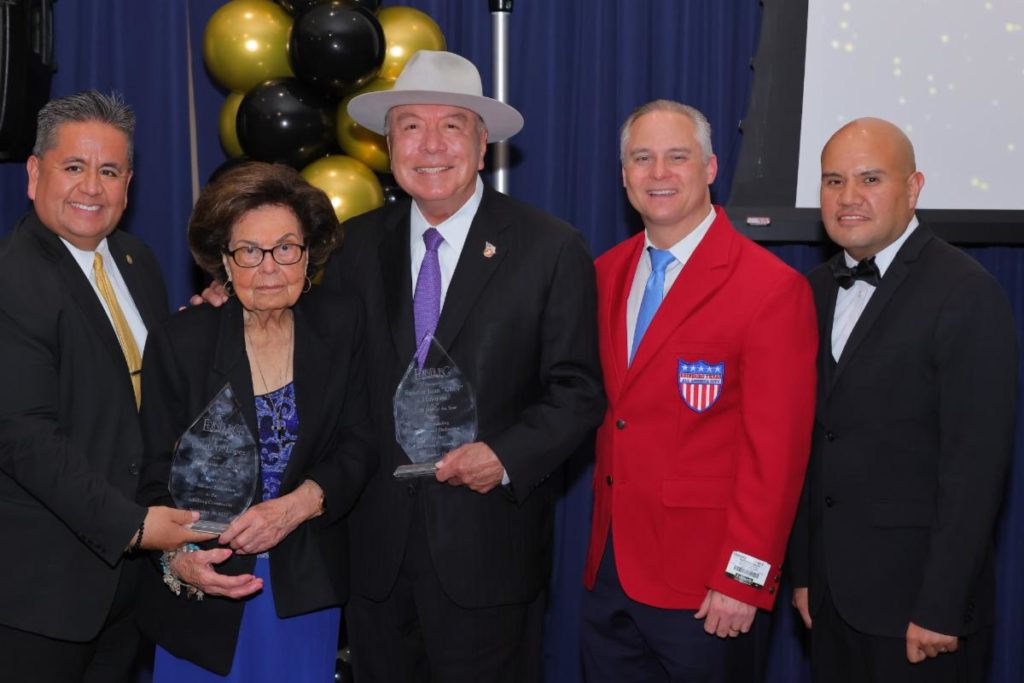 The Edinburg Chamber of Commerce held its 90th annual awards banquet on Wednesday, November 16, 2022, at the Edinburg Conference Center at Renaissance. The Edinburg Chamber recognized many leaders including the 2022 Man and Woman of the Year Senator Juan “Chuy” Hinojosa and Estella Lopez of Sierra Title Co.

Senator Hinojosa was recognized as Man of the Year for being a champion for the City of Edinburg. One of his proudest achievements is the landmark legislation, Senate Bill 24 from 2013, which created UTRGV and the region’s first medical school. Both the university and the School of Medicine continue to transform the City of Edinburg and the Rio Grande Valley. With less than ten years since the passage of this legislation, the progress and success has already far exceeded the goals and expectations. The School of Medicine currently enrolls more than 200 medical school students, oversees 259 medical residents in the region, manages 31 UT Health RGV sites, and generates $154 million in annual revenue for the UTRGV School of Medicine alone.

Senator Hinojosa’s leadership and strong support for public education also has resulted in historic funding for our students and teachers. With the passage of House Bill 3 in 2019, a bill co-authored by Senator Hinojosa, Edinburg CISD received an increase in state funding of $22.2 million per year. This funding also allowed for teachers to receive an average salary increase of more than $3,000 per year. In January 2023, Senator Hinojosa will complete 20 years in the Texas Senate and 36 years of service to the State of Texas.

Lifetime Edinburg resident, Estella G. Lopez has been named the Edinburg Chamber’s 2022 Woman of the Year. Lopez was recognized at the Instillation banquet for paving the way for women in business. Throughout Lopez’s long career she has inspired women with her exemplary work ethic and commitment to serving her community.

In September 1945, Lopez completed her training at the McAllen Business College. Lopez first began her career at Fidelity Abstract in Edinburg, where she started out as a typist clerk for the abstractors on a manual typewriter. She quickly moved up the ranks as a secretary, then a closer, and eventually became the Fidelity Abstract Branch Manager. Lopez has been employed at Sierra Title Company for over 76 years and is still currently employed at the age of 94.

The Edinburg Chamber also recognized outgoing and incoming presidents of the board and directors who serve the organization with dedication and enthusiasm. Among them was the 2021-2022 President of the Board, Micheal J. Williamson of Texas National Bank. Williamson noted the chamber’s accomplishments which include an increase in membership by 28%, hosting over 60 ribbon cutting events, and delivering quality-of-life events such as Texas Cook’Em: High Steaks in Edinburg, Fiesta Edinburg, and the new South Texas Builders Expo.

Also honored that evening was the incoming Chairman of the Board, Mario Lizcano of DHR Health. Lizcano addressed the attendees with the organization’s goals for the upcoming year. Which includes continuing to promote tourism initiatives through the Explore Edinburg campaign. Establish a Downtown Association to help with the city’s revitalization efforts to Edinburg’s historic downtown square. Lizcano also wants to dedicate some efforts on the city’s youth in hopes of launching a junior ambassador program. The purpose of the Junior Ambassador Program is to encourage High School students to become active in the Edinburg community.

This years Edinburg Chamber of Commerce Board of Directors includes: